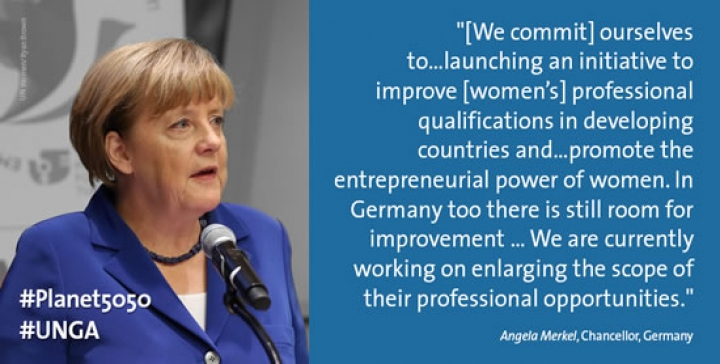 As we are children, there are no limits in our dreams and aspirations for the future. We feel like we can be anything we want: an astronaut, a knight in shining armour or a deep-sea diver. But then there is this thing called “gender stereotypes” these ideas of what boys and girls are traditionally prone or able to do. Girls are expected to be good at arts and humanities, while boys are led towards maths and science. These stereotypes are met within the process of growing up again and again until they start to shape preferences and career paths. Most men go into better payed jobs in the science, engineering, technology and informatics field, while women tend to choose teaching and social work professions.

In the last century the commonly known slogan “Kinder, Küche, Kirche“ was still used in every day discourse. It can be translated to “children, kitchen, church”. It has a mostly derogatory connotation, describing what is seen as an antiquated female role model in contemporary Western society. Today it is sometimes replaced with “Kinder, Küche, Karriere“, meaning „children, kitchen, career“, which shows that a woman is still seen as the one responsible for household and childcare, while she is in addition requested to become a career woman. These stereotypes and double burdens are decreasing in Germany, especially in recent years. Yet there is still much to do. To acknowledge and challenge gender stereotypes is essential towards making gender equality a reality.[1]

Once Upon A Time

Married men used to have the right of final decisions for all family matters until 1957 when the Equal Rights Act came into force. It was only in 1977 that women in the Western part of Germany were entitled to gainful employment without the authorisation of their husbands. A Women’s right to vote is not even a hundred years old in Germany, as women were only allowed to vote on January 19th, 1919.[2]

Equality between men and women is enshrined through the Article 3 in the Basic Law for the Federal Republic of Germany. It states[3]:

In 1994, a new article was added to the German Constitution that provided the obligation for the authorities to fight inequality between men and women, in so far as the State promotes the factual implementation of gender equality between men and women and strives to eliminate existing disadvantages. The laws ensure equal rights and prevent discrimination in Germany and were developed on the basis of these rights of equality.[4] The General Act on Equal Treatment has been in force since the 18th of August 2006. It incorporates four Anti-Discrimination Directives of the EU into German law. The purpose of this Act is to prevent or to stop discrimination on the grounds of race or ethnic origin, gender, religion or belief, disability, age or sexual orientation. The General Act on Equal Treatment governs the claims and legal consequences in the case of discrimination, both in the field of work and also for the sphere of civil law.[5] As to gender reporting, the Federal Government submitted its first Report on Gender Equality in 2011 and is committed by decision of the German Bundestag (parliament) to draft such a report from now on once every election period.[6]

Just as in all European countries, women used to have many disadvantages compared to men in the course of their education. They might have had the same or even better grades in high school, but as soon as they proceeded to university, the men dominated the field. The higher the education, the more difficult it became for a woman to rise up to the top. In the academic field it was for the longest time mostly men that continued to do their PhDs and become professors. In the last decades European countries have made a significant effort to improve the situation of equal access to education. In Germany in 1990 women started to increase their numbers of study exits from 29-37%.[7] Since then all differences in percentage of study beginners have vanished until today. The youngest development shows that with equal chances to access more women receive better education results and are more prone to study than men. In the field of medicine women make 9% of students and men 4%. As this is a recent development that just improved in the past years, men still mainly obtain the higher positions in universities.[8]

Germany had previously committed that in 2016, stock-listed and fully co-determined companies will be required to reserve at least 30 per cent of supervisory seats on their boards for women.[9] Since 1 January 2016, a gender quota of 30 per cent has been in place for the supervisory boards of businesses that are listed and are subject to parity-based co-determination. Pay discrimination is already forbidden, but the Federal Government also plans to introduce new transparency regulations. Compared to their proportion in society, women in decision-making positions are underrepresented in Germany, both in the political and economic area – even though equal rights for women and men are guaranteed by the Basic Law, by the Federal Equal Treatment Act and by the respective laws in the federal states (Länder) and regardless of the fact that equal opportunities for men and women constitute an essential objective of equality policies. Participation of women in top positions of companies is a prevailing issue, in contrast to female participation in political decision-making.[10]

As for the gender pay gap, women in Germany still suffer from broad differences of payment compared to men. Women tend to study more social sciences and humanities whereas men study subjects in the hard sciences. Those choices, impact later earnings for both groups as jobs associated with the social sciences and humanities tend to pay less. The Federal Government has launched a programme encouraging women to study engineering-, technology- or science-related subjects to counter this trend.[11] The efforts that are made to undertake gender stereotypes is the Girls Day and the Boys Day, also referred to as students future day. It is a program that allows girls to look into male dominated spheres such as computer scientist or as carpenter and boys to spend a day in a primary school or in elderly care.[12]

In recent years, different federal governments with different political majorities have focused on family policies. The number of childcare facilities has increased, all-day schools were partly established and a new income replacement scheme was set up.[13] Germans taxpaying citizens are entitled to Kindergeld if they have children. This is an allowance (also called a Child Benefit) from the German government to help defray some of the cost of raising children. It can run from €192 to €223 per child every month. Parents receive this children’s money from the government until the children turn 18, though it can continue until they are 25, if they are still in school or meet other requirements for an extension. Starting in January 2017 the benefit has been raised to €192 per month for each of the first two children, €198 for the third child and €223 for each subsequent one.[14]

Elterngeld or “Parents Money” is limited to the first 12 or 14 months following the child's birth. The amount of the Elterngeld is based on the after taxes income of the parent dedicated to caring for the newborn and is to be viewed as a limited income subsidy. It allows for both parents to exercise their right to time off with their new born and to receive Elterngeld, too - by sharing the allocated "Elterngeld time" (12-14 months total). It recognizes that mothers (or stay at home fathers) are “employed” persons and encouraging fathers to contribute more actively to the care of children.[15] The Eltergeld has contributed to more “active fathers”. that 34 % of German fathers take parental leave with the average spending 3.1 months at home with their child.[16] The parental leave regulation, covering three years, remains in force. Parents may remain in employment but for the time of their leave receive neither wages nor benefits. Since 2013 all families have a right to give their children to childcare provided by the state.[17]

In Germany, a new regulation will improve the financial situation of single parents. Since single parents often do not receive financial support for their children from the father (or, in rare cases, from the mother), federal authorities pay an advance subsidy in order to ensure their economic stability. On 16 November 2016, the Federal Cabinet agreed on a new regulation on the federal advance child maintenance payment (Unterhaltsvorschusszahlung). From July 2017 onwards, this payment will be granted until the child turns 18 years old, whereas, according to the rules in force until June 2017, it is provided until the child turns 12 years old and for a maximum of 72 months.[18]

Every woman in Germany can have contraception and until the 20th birthday it is handed out for free. According to the controversial § 218 of the Penal Law, abortion is illegal in Germany, but not punishable when a woman seeks counselling before. The abortion rate has been decreasing constantly. The day after pill is available without prescription. Maternal mortality ratio in Germany is among the lowest in the world.

Gender Equality is not yet achieved in Germany and there will be more changes necessary in the future to come close to it. Nevertheless it is good to look back in history and notice, that it is a long way that women have come. Every small change in policy and every woman that achieves something are important things worth noticing for they lift all women forward. The different member states of the EU are on very different levels of progress, while it is to be noticed that Scandinavian countries like Sweden have an even better parental leave policy, and companies with big differences between genders risk paying fines, if they don’t respond to it.[19] It is important to notice, that the way Sweden or Germany are advocating for gender equality is not be conferred in the exact same way to other countries such as Indonesia. It is necessary to look at every country’s needs to see where to go from. The progress to a completely equal society can’t be made within a year of time. It might take long, but it is only good and necessary to discuss and inspire one another in the process.

About the author: Malin Klinski is a student at Universitas Gadjah Mada where she studies at the Insitute for Social and Political Sciences.

[3] Basic Law for the Federal Republic of Germany